Sold a calf - made up with the new ones coming on... 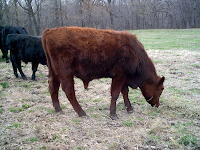 Bittersweet when I spent so much time growing this little bull-calf up to size and then auctioning him off.

We don't often have a red bull calf - and had it been a heifer, I would have kept her just for the interesting color. We called him "RB" (short for red bull) and he was a wonder. I found that as he was growing up, he was actually taking care of the younger calves - especially when they got separated from their mother. Gentle, he loved to be scratched (especially if you gave him a piece of whole corn to chew. Never saw him butting the other bull calves around (except in self-defense.)

And this blog post is really a way of saying goodbye - you wouldn't think a person could get attached to a calf in just over a year, but I did. Always said he was special, but didn't want to stay around the auction arena to find who bought him. Brought a good price, if that's any relief.

I know that he came to us for a special reason and hope that I hear he was a good sire.

Bulls have it bad, because people often won't keep them around after they quit being able to keep all their herd "bunched up" - meaning he can service all the females (up to 50) within a few months and get them all pregnant and able to deliver good, healthy calves at mostly the same time.

Cows are kept until they really get too old to have calves - and they usually don't last much after that - which is about 12 - 14 years. So you can get attached to them as well.

We are on our last 5 original cows that have been here since I returned to Missouri, and plans are right now to sell them before next winter. Three were finding the ice-packed ground hard to walk on and were limping until I got them softer pastures and shorter distances to walk. So we'd be better shipping them off, even if pregnant and ready to deliver next spring. Better than vet bills and nothing to show for our trouble except a cow to bury.

So a farmer's life has to be a bit dispassionate when it's called for.

I sometimes get perturbed at people who swallow that BS which is spouted off about where their beef comes from. Statistically, most beef is raised on farms across the US where there are about 50 head or less. Only a small percentage is actually raised on these "factory farms". We used to raise cattle in a feedlot, but now I find it's cheaper to simply keep them on grass all year round and sell calves when they are about 14-16 months old and the grass is starting to get short in August. Doesn't cost me anything more, plus I was losing a steer every other year to this or that disease from keeping them in a feedlot - so my costs were high.

Logistically, to fatten cattle, I was paying about half the calves back to my feed bill. Actually, when I found that out, I sold the next lot as feeder calves (a week after weaning) and made just as much money. The next year I kept several steers back and sold them as "stockers" when the price of corn was high, so stockers actually were bringing a better price than feeders that month.

Now this has become policy around here. I'm still saving heifers back and working with them every day so they stay familiar with me and I can approach them with their calves right after birth. We work to birth the calf on grass, so they don't have the disease problems (scours) and stay healthy form the get-go. Better for the mother as well. We're actually working to move our birthing back a month or so, from February to March-April so that can happen.

Of course that conflicts with planting season a bit, but we're working that out by putting more crop ground into hay/pasture. And this year, I'm rotating my cattle through our cover crops so that they can forage off of it and fertilize as they go.

I guess I've written enough today. I could talk about this for hours at a time. Literally.

Just wanted to say Goodbye and Good Luck to RB.
Posted by robertworstell at 5:40 PM